The Nation’s First Ladies are being honored on a series of one-half ounce 24 karat gold coins. Typically, four different designs are released per year featuring the spouses of the Presidents in the order served.  The First Spouse Gold Coins represent the first time that the United States Mint has featured women on a consecutive series of coins.

The series received an extremely enthusiastic response from collectors when it launched in 2007. The first three releases of the series featuring Martha Washington, Abigail Adams, and Thomas Jefferson’s Liberty achieved rapid sell outs of their entire authorized mintages.

Despite this early popularity, interest in the series would eventually wane leading maximum mintage levels to be reduced. As collectors purchased fewer coins, certain issues concluded sales at extremely low levels, creating some of the lowest mintage gold coins in history.

The order of release for the First Spouse coins follows that of the circulating dollar series, with some modifications. For Presidents who served in office with a first and second wife, two gold coins are issued for the Presidency. For Presidents who served in office without a spouse, a depiction of Liberty is presented on the obverse of the coin for four instances, with Suffragist Alice Paul depicted for the final instance.

First Spouse Gold Coins each contain one half ounce of .9999 fine gold. The coins are considered numismatic items and have a nominal face value of $10. The gold used to mint the coins must be obtained from newly mined domestic sources. 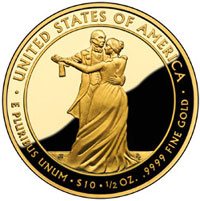 The obverse of each First Spouse coin features a portrait of the spouse being honored. Inscriptions include the name of the spouse, the years served, the order of the Presidency, date and mint mark, the motto “In God We Trust”, and “Liberty.”

The reverse design of each coin contains images emblematic of the spouse being honored. Some of the reverse designs so far have included memorable scenes from the spouse’s life, or images representative of their major contributions, themes, or accomplishments.  The required inscriptions on the reverse include “United States of America,” “E Pluribus Unum,” the denomination, and the weight and purity of the gold content.

The First Spouse Gold Coins have typically been issued following the circulation release date of the corresponding Presidential Dollar. During the course of the series, there have been a few years where production problems and other issues have delayed the release of the coins. These instances have served to compress the release schedule and impact the overall availability period for certain releases.